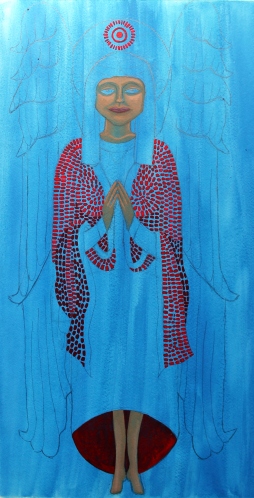 In my last painting, FILL THE WELL, I experimented with lines and dots.  One might say I went a little too far. So I tried to think of a subject matter which might actually celebrate “over the top”.  For some reason mosaics and religious icons came to mind. Which instantly made me think of this: 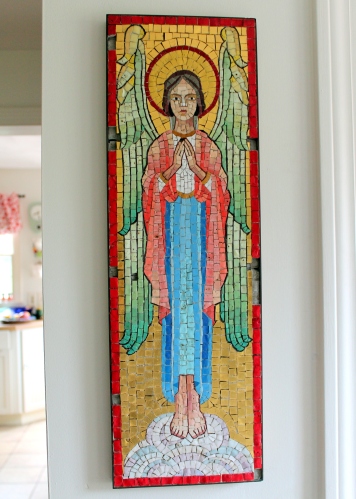 This mosaic hung in my grandmother’s home for over 60 years. As a child I would imagine that it came from Rome and was an exotic ancient artifact. It always seemed otherworldly. At least not from my little world.  I always loved this mosaic.

My grandmother passed this year, but before she died she gave this to me.  Because she was still with us, I was able to find out how it really came to hang in her house.

My grandmother was born in South America.  Her mother married a British doctor and they came to live in New York City.  The doctor was known to my mother as Grandpa Doc.  Apparently Grandpa Doc had a very Italian last name which at that time did not help his career, so he changed his last name from Gaspari to Williams.  Grandpa Doc had a brother.  A brother who kept his family name and was well-known as a mosaic artisan for the grand churches of New York and other US cities.  My grandmother admired his work and so her uncle made this for her.

I thought that was such a cool story.  A sign of those times, when one would change their name while moving through Ellis Island in hopes of a new beginning.  Yet you are who you are.  Mr. Williams I’d imagine, could only hide so much. Clearly he had an Italian brother who lived in the same city and was an artisan.  The two extremes…a prim and proper doctor and an ethnic artisan. I love it!

Of course it’s all fantasy.  I didn’t exist then so who knows the real truth. But now, the mosaic hangs in my hallway and I will pass on the story and I’m sure it will get a little more elaborate…and one day, I will have a cheeky little grandkid who’s a little eccentric them self and seeing this mosaic will have peaked their interest and this is who it will go to. Another generation of…. The Artisan.

So that was what was rolling around in my head this morning as I decided to make an angel of my own creation.  My angel is going to be loaded with color, pattern and designs.  I am welcoming it to be over-the-top and fun!  While I am borrowing from the religious icons, this icon will be an angel who delivers inspiration to all who love art & creativity.

View all posts by becreativemary