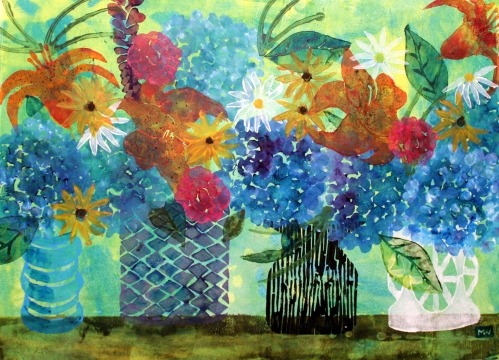 Well you might as well compare me to a five-year old because that’s how much fun I was having playing with my new stamps today!

and boy, did I make a mess! 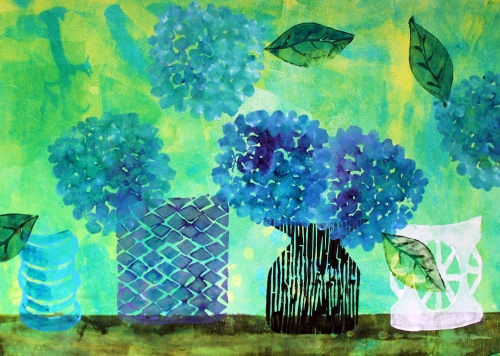 I got about this far, when I realized I’d really like some Tiger Lilies and roses. So I had to stop, cut some wood, and create some more stamps.

So I had to stop again.  Something tells me I could keep on going for a VERY LONG TIME!!!

The painting today is really an experiment.  I wanted to stamp as many of the stamps as I could to see how they worked.  I learned quite a bit.

First, the background needs to be lighter.  A lot of the color was dulled by the background.  Two, careful attention to the layout and composition need to considered before moving on because three, you need to know what the composition is going to be so you can stamp the background first and gradually move to the foreground. It’s actually a lot like real flower arranging.

I probably should have added more hydrangea to the background right from the beginning because you cannot add them later on in the painting.  They would be overlapping too many things and seriously look awkward.  Biggest flowers first…work your way to the small.

Tomorrow I will try again and try to use some of the knowledge I gained. The final product is very 2-D, but I think if I can find some fun compositions, this medium could be a great outlet for me.

To think, the inspiration came from doing art with children.

Note to self:  Creating art with kids is good for one’s own creativity.