This class begins with inspiration from a New York artist named Heather Galler.

Her work is crazy colorful and adds everything but the kitchen sink.  I love it! 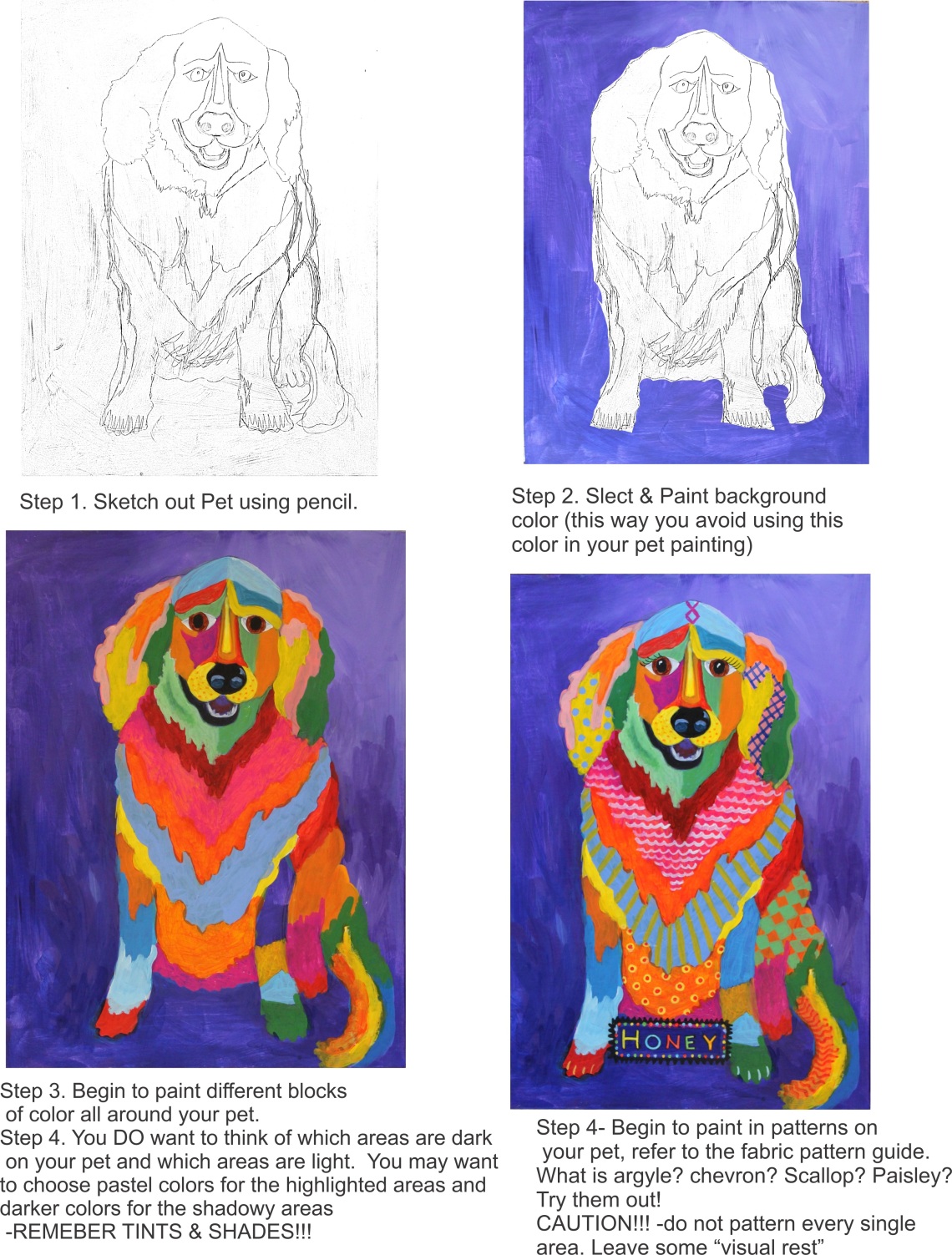 I asked the kids to bring in a picture of their pet this week.  You should have seen their eyes when they realized they were somehow going to reinterpret their brown, grey and white pets into color-scapes.  They were freaked! …but of course we could break it down into steps and make it do-able.

Now this is where it sort of went wrong, I didn’t really consider how long the pencil sketches were going to take.  Long story short, they took up 2/3 of the class.  Another miserable thing – I brought in my good camera and took some awesome shots of the kids working on their paintings.  When I plugged my camera in this morning, I realized there wasn’t a memory card in the camera the entire class…UGHHHH! That is the worst experience!

So in a nutshell, we sketched, we loosely sectioned off the pets into areas and started color blocking.  No patterns at this point, you simply fill in the animal with colors that are visually appealing.  We did talk about when you might want to add tints and shades, we decided pastels and full on color would give us the same effect.

This is as far as we got before time ran out.  Still color blocking…

Next week we will accomplish the final step.  Pattern.  I compiled a sheet of all different fabric patterns.  We talked about some of the names of patterns like hounds tooth and chevrons.  It would be great if some of the names sink in…the patterns are timeless and are great design principles. 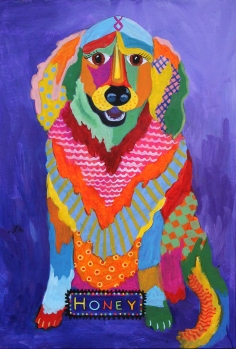 My portrait is going to some best friends who recently lost their family member, Honey, to Lyme Disease.  Heartbreaking stuff.  Heather Galler outlines her pets in black, but something about a Golden Retriever prevented me from doing so.  They are just so soft and furry, I thought the black paint would be too harsh.  We will see what my friends think, I could always add it if they thought they’d like it.  I also didn’t add pattern to the background.  If I was painting my cat, I think I’d go wild, but for a tribute to Honey, our quite friend who always followed, I didn’t want anything in the back to compete.  Again will see if my friends want stars and stripes.  I can always add more, but taking away is a bear!

All in all, I have to tip my hat to Miss Galler because this exercise was way more difficult than I anticipated.  Bouncing colors off each other is no easy task,  I changed some sections quite a few times until I was happy with the color harmonies.

Next week is the final class of the acrylic session.  I have another lesson planned, so we will have to figure out how to finish this project and still be able to start & finish another…WILL DO IT! I’m sure!

Alas my giant bird painting hanging unfinished over my mantle is coming along at a snail’s pace.  I get so frustrated because there just isn’t enough time in the day.  I need to go back to watercolors.  They are quick and finite.  Acrylic allows me to repaint an area I don’t like twenty times.  It’s the definition of insanity!  I spend hours on an area only to cover it up and try something else.  Not fittin’ for my personality.  I need to be forced to hand over the painting… I hope to get this done soon!

My Day-of-the-Dead skulls are finished from the pottery studio.  I hope to take some pictures at the beginning of next week.  They are awesomely fun!

‘Til next time…keep on creatin’

View all posts by becreativemary